(Or, go back to Teaching: Game Design)

So we had our second class the other day.. We built upon what we had already done in our first story, but this time I challenged the team by adding three new twists:

Before we brainstormed story topics, I drew an empty storyboard.  This new twist required everyone to think about how to create a story that had to fit within a particular set of requirements.  Each passage had a pre-determined number of entries and exits.

The reader would be able to chose between two distinct endings!  This introduces the concepts of choice not where the user is returned to the beginning of the story (like our forced restart traps), but where the reader is allowed to influence how the story completes.  In this scenario, both choices would lead to a single terminal passage that resolved the story.

We worked for about 30-40 minutes again brainstorming ideas, and then began to create the story.  When all was said and done, we again played through our game several times with much excitement and laughter.  Their grandmother was in town and was able to see the finished product too..

Below is a picture of the bare storyboard that I drew.. 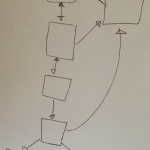 The brainstorming session looked like this..  we settled on a halloween-ish story since it was almost halloween.. 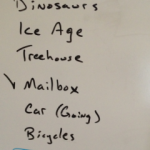 And finally our resulting game looked like this (storyboard and resulting twine map).. 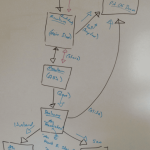 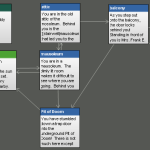 Here is the playable version of our second game.. enjoy!